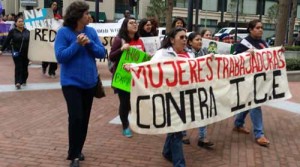 OAKLAND, Calif. – They came from all walks of life – students, restaurant workers, caregivers, teachers, mothers – and they all had only one message for those who came to listen to them: Women need to feel safe and be allowed to live with dignity.

The women, about 110 of them, and a handful of men, took to the streets here earlier today to observe International Women’s Day, as thousands of their counterparts in different parts the world did the same.

Organized by Just Cause, the Bay Area women also remembered Berta Caceres, who last week was murdered in her home in Honduras for her environmental activism. They dedicated the half-hour long march from Lake Merritt to the federal building in Oakland to her.

The courtyard of the federal building rang out with cries from the marchers demanding an end to violence against women. “Deportation is Violence Against Women,” screamed a sign. “Keep Families Together,” said another.

“Mothers are leaving their homelands so their families can live,” said Tina Shauff of Gabriela USA, a grassroots alliance headquartered in the Phillipines that is seeking justice against oppression for all Filipino women.

“Tearing families apart is not ok,” said another participant.

Just Cause’s Executive Director Maria Poblet said it was only a matter of time before women in the United States build a strong feminist movement.

Emily Lee pointed out that violence against women would not end just because a country has a woman president or a woman becomes the chief executive officer of a corporation.