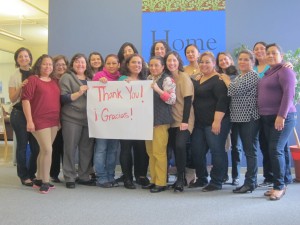 Join Our Community of Supporters

In order to sustain our important work, MUA needs your financial support.  We welcome donations of any size and invite you to join MUA’s community of supporters.  MUA also welcomes you to join our Madrina’s Circle Sustainer program.  MUA Madrinas make an annual pledge that can be paid monthly, quarterly, or annually.

Donations can be made on-line or mailed to:

MUA is proud to be part of the Local Independent Charities of America. Ask your employer if they have a workplace giving campaign and whether it’s possible to donate MUA via deductions to your paycheck!

Many employers match their employees’ charitable giving.  Ask your employer if he/she would be willing to match your contribution to MUA and double your impact!

MUA is proud to partner with Community Thrift in San Francisco.  When you donate clothing, home goods, and other items to Community Thrift and identify MUA as your charity of choice (#23), MUA receives the proceeds from the sale of those items.

MUA does not accept donations of clothing, linens, towels, or stuffed animals.

In honor of MUA’s 25th anniversary, we have received a $25,000 matching gift from generous supporters.  Every dollar raised by new donors or that represent an increased gift from existing donors will be matched!  We have already raised $15,000!  Help us raise the last $10,000.  Thank you to our event sponsors, silent auction donors, and supporters that made our 25th Anniversary Celebration a success.