I never imagined I would become a ‘leader’: Interview with Juana Flores, Executive Director of MUA 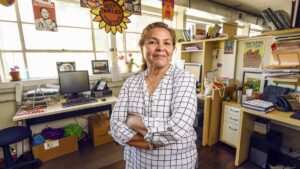 Juana Flores is Executive Director of Mujeres Unidas y Activas (United and Active Women), a California-based non-profit organization that aims to increase Latin American women’s leadership and empower communities to push for social and economic justice. An immigrant herself, she tells us about her journey.

How do you see your journey today?

I never imagined I would become a “leader” when I arrived at MUA. I could never have envisaged that one day I would find myself representing workers at the United Nations and speaking at the General Assembly, or that I would stand within a few feet of President Obama, or that I would meet the Pope. Yet all this happened to me. It is incredible to think that a group that started with 8 women has now grown to reach thousands of women. At the beginning, I saw it as just a support group where we cried on each other’s shoulders, but now I see that by doing that we developed our own strength. Our founders had greater aspirations for us, and thanks to the trust they placed in us, we have achieved them.

Where did you grow up and what was your childhood like?

I remember the first time I was invited to a demonstration in front of City Hall with MUA. I said I would go, but I was too scared to show up. I felt so ashamed that I almost didn’t come back to MUA. But I decided to go anyway, and to my amazement no one judged me or made me feel bad. They just told me that they understood and that one day they knew I would feel safe enough to be on the streets with them.

I grew up in a small town called Guadalupe, in the state of Zacatecas, Mexico. My father was a construction worker, and my mother was devoted to raising her 11 children, but she also did other people’s laundry and sold her embroidery work to help support the family. With my brothers and sisters, I was often the one who got everyone to play. I was the one who settled conflicts between my brothers and sisters, and sometimes between them and the other children in the neighborhood. My mother pushed me towards independence: she sent me to run errands around the city on my own. From a very young age I also did errands and housecleaning for my neighbors to earn money.

Can you tell us about your experience before emigrating to the United States?

At the age of 12, after finishing primary school, I took a business course aimed exclusively at girls for a year and a half: the course included typing, stenography, basic accounting, etc.

And then at the age of 14, I chose to become a nun, in an extremely strict order. The nuns live a completely cloistered life there. It is a difficult and austere life. I stayed there for almost 10 years. I eventually left the order and got engaged. Not too long after I married, we had our first child and my husband had difficulty finding work in Zacatecas. In order to have an economically stable life, we moved to San Francisco in 1989.

How did you come to join Mujeres Unidas y Activas?

At my son’s nursery school, a woman told me about a new immigrant women’s support group. She insisted that I participate. I kept walking past the place where the group was being held but I was too nervous to go in. Eventually I went. At the third meeting I attended, I heard about a Saturday training program. It was an 8-hour training on self-esteem. I participated actively and got very involved. It was fascinating.

Over time, I learnt to be a better parent, to have healthy communication with my partner, to set my own goals. I also learned that I have rights: as a woman, as a mother and even as a worker. I was really amazed that I could stand up for my rights.

How did you become a volunteer at MUA?

When I was asked to volunteer to facilitate a workshop, I immediately accepted because I wanted to give back some of what I had received. I learned how to run “Know Your Rights” workshops for immigrants in schools and churches and I even organized group sessions in my home.

The most important thing I learned by becoming a member of MUA is that I am truly valuable. I was brought up with the conviction that women have no value, and I believed it. I learned that I had a voice, that I had the capacity to continue to learn and that I could convey this message to other women. If I had not taken part in all these training programs, I would never have felt able to facilitate a workshop myself. I learned how to organize my thoughts, how to take notes, how to speak in public. I learned how to make contact with experts in the community, such as immigration lawyers and social workers, who could come to give talks… My own mental sharpness and creativity were stimulated.

You soon became an employee at MUA, how did that happen?

At first, the founders offered me a few hours of paid work per week to coordinate the support group meetings. My husband encouraged me because he saw how it energized me. Then in 1994 we opened the first MUA office and I became its manager. The most difficult thing for me, as a staff member, was my role as a counsellor, listening to the challenges faced by women, their trauma and suffering. Sometimes they wanted an abortion or to talk about their relationship with a lover, and, as a religious person, it was difficult for me to listen to them without being judgmental. The terrible stories of domestic violence were also very difficult to take in. It helped me to understand that we could not put other women in this role without training them.

I therefore contributed to the development of intensive training programs for our members on the role of peer counselors and support group facilitation. We called on experts and shared our experiences and best practices. That helped us to develop leadership skills among our members, which serve our community. That is what I am most proud to have achieved.

I was eventually offered a full-time job when one of the founders left. In the early 2000s, after the second founder left, I became Co-Director of MUA.

A short time later, MUA, which was financially dependent on another structure, the Northern California Coalition for Immigrant Rights (NCCIR), lost its funding when NCCIR closed down. How did you respond?

We did not want to close MUA. So, we continued to work without pay and decided to create our own non-profit organization instead of depending on another structure. I had gained a solid foundation through my early years at MUA, but I did not know how to run an association without the support of our founders and our financial partner.

I asked for help from experts, I had to continue to learn and question myself. I learned how to manage a strategic planning process, how to hire the right people to help us develop, how to supervise and make difficult decisions. Eventually, in part because of the challenges I had encountered, we launched our “Futuro Fuerte” (Strong Future) program, which provides training and professional coaching to help immigrant staff gradually take on greater supervisory and leadership roles. This program helped me personally to take on greater responsibilities over the years. And then in 2017, when my Co-Director announced her departure, the Board of Directors asked me to take on the role of Executive Director. And my learning experience and personal growth continue to this day.

Today, if I were to pass on a message to women, I would say that together we are stronger. Each woman can stand up for what she wants and go further, by working in community with other women from different backgrounds, with each of us supporting, protecting and bringing the others forward with us.