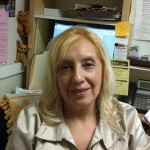 Hortencia Muñoz Guevara was born in Hidalgo, Mexico. She arrived to the United States in 1993, with her three year old son. While she worked two jobs to support them, she could hardly spend the time that she wished to spend with him, but she knew that it was necessary for them. Hortencia first came to MUA in 2007 and she began to heal the pain of having felt alone, and survived domestic violence. After taking part on trainings and marches, Hortencia was inspired by the efforts of the women she met at MUA in struggling for immigrant rights and domestic workers’ rights.

Today, Hortencia helps the women who arrive at MUA, and facilitates workshops in Hayward and Oakland. She also provides peer counseling and support to women as part of our partnership with the SAVE shelter in Fremont. Hortencia began as a member, then as an intern with MUA’s “apoyo” (support) team, and she looks forward to sharing her knowledge of the community’s rights and the resources available to them as part of MUA’s staff.