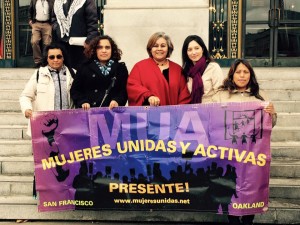 MUA was founded to empower immigrant women in finding solutions that affect their every day lives; from community resources, domestic violence and assault intervention, and workforce programs.  They are dedicated to mobilizing immigrant, working class and voters of color to help push progressive policies forward.  – See more at: http://mujeresunidas.net/

Domestic workers–a primarily immigrant women workforce of nannies, caregivers, and housecleaners–have been fighting for more than seven years to see the value and dignity of our work reflected in California state labor law. Mujeres Unidas y Activas (MUA) has been the forefront of this movement building since 2004 when we defined winning labor protections for immigrant domestic workers as our primary organizing focus.  Since that time, we have come together with organizations across the state to found the California Domestic Worker Coalition and successfully passed AB241, the Domestic Worker Bill of Rights.

This year, MUA is leading the California Domestic Workers Coalition in introducing SB1015 with Senator Connie Leyva (D-Chino), which would defend overtime equity and support dignified labor standards for California’s domestic workers. SB1015 continues the success of our ground-breaking 2013 legislation which granted long-overdue overtime protections to the state’s caregiving workforce.  SB 1015 seeks to remove the sunset provision in AB241 because we believe our families deserve permanent protections. 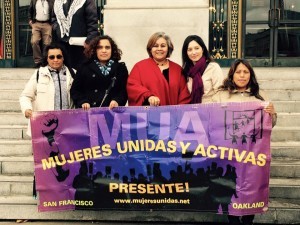 In California, there are over 300,000 housekeepers, nannies and caregivers for seniors and people with disabilities who care for the health and well-being of many California families and homes. Domestic workers are primarily immigrant women, manly Latina and Filipina women, who work to support our own families as primary breadwinners. We are mothers, abuelas, and tias –all working to provide a better life for our own families and defend the dignity of the families and loved ones for whom we care. While domestic work is essential to the California economy and to the ability for Californians to live independently, many domestic workers lack permanent labor protections. SB1015 would rectify this historical exclusion and affirm domestic work as legitimate work. At the core, this bill is about equity and civil rights. – See more at: http://sff.org/mua-leads-the-california-domestic-workers-coalition/#sthash.XDM3B65f.dpuf 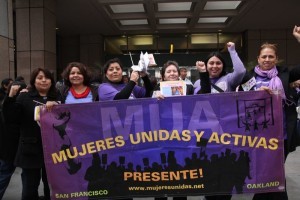 This past Monday, over 70 domestic workers traveled to Sacramento to begin talking with legislators about SB1015.  Caregivers like Myrna Rivera Asan from Pilipino Workers’ Center in Los Angeles who took a day away from work, leaving her home at 6 pm and traveled all night on a bus to arrive at the Capitol at 6 am so that she could share the good news that AB241 has worked.  After years of working 24 hours a day 5 days a week, she now has a 12 hour schedule, receives the minimum wage and overtime pay, and can spend time with her family and contributing to her community.  Myrna was joined by Monique Harris and other members of Hand in Hand, the Domestic Employers Network.  As someone living with a disability, Monique shared that the attendants she has employed since she was 18 years old have helped her to raise her son, graduate from college and make it possible for her to be a successful artist and business owner.  She supports overtime protections for domestic workers because she knows that the work is hard, important, and dignified.  On Wednesday, April 6, Mujeres Unidas y Activas will join our Bay Area Coalition partners in sending 3 buses to Sacramento to testify in support of SB1015 at the Senate Labor Committee and continue pushing our movement forward.

We believe that domestic workers should be recognized, celebrated and protected for improving the quality of life for children, seniors, people with disabilities and their own loved ones. Since the passage of the original Domestic Worker Bill of Rights, domestic workers have taken to the streets to conduct expansive community education and enforcement campaigns all across the state. As a result, domestic workers have reported improved confidence and ability to advocate for dignified standards in their jobs and employers have more clarity about workplace standards. Without the passage of SB 1015, much needed state protections would no longer apply to this historically excluded workforce. It’s time to uphold the dignity of domestic workers and make overtime a permanent labor protection for all workers.  We hope you will join our movement!

Defending The Rights Of Domestic Workers

The very nature of their work keeps domestic workers hidden from view. It might have stayed that way but for the commitment of organizers like Katie Joaquin. In 2013 domestic workers used public policy and their powerful voices to win a workplace right they had been denied for decades: overtime pay. In 2016, they are advocating again to make that hard-fought right permanent.

“Every woman who marched was transformed—I was transformed. There are certain moments in life when you’re facing something that you’re scared to do and you decide to do it anyway—and it changes you forever,” said Katie Joaquin.

Fifty women from all over California stood smiling around Governor Jerry Brown. He had just signed a new landmark law: the Domestic Workers Bill of Rights.

Almost a decade in the making, California became the third state where workers employed in other people’s homes are finally entitled to protections long taken for granted in other occupations. Only New York and Hawaii have similar laws.

Katie Joaquin, campaign director for the California Domestic Workers Coalition, was there that day, September 26, 2013. Two years prior, she had been a fellow with the Women’s Policy Institute—a program that teaches grassroots women leaders to use public policy to advocate for social change. As a fellow, Joaquin helped craft a precursor bill to the one signed by Brown. She was also instrumental in the law’s passage.

Brown planned to leave the room as soon as he signed the bill. But then Joaquin saw Emiliana, a tiny Filipina woman in her 80s, approach Brown. For years, Emiliana worked 14-hour shifts earning only $50 a day.

“This means so much to me,” she told Brown with tears in her eyes. Joaquin said the governor’s face softened. She said, “For me, that was a moment.”

A Study that Catapulted a Movement

When Congress passed the Fair Labor Standards Act in 1938, it intentionally excluded domestic workers because they were primarily African-American women who were not considered equal to other workers. In addition, many policy makers did not consider work in the home—historically done by women—as real work. California followed federal laws in excluding domestic workers in basic employment protections. In recent years, many domestic workers were scared of deportation and did not know about recourses available through the law. So they remained silent about their workplace conditions.

They might have remained in the shadows if Mujeres Activas y Unidas (MUA), a nonprofit that promotes the rights of Latina immigrant women and a grant partner of the Women’s Foundation of California, hadn’t commissioned a study in 2004. MUA knew anecdotally that many domestic workers were underpaid, overworked, and in some cases, physically, sexually or emotionally abused. But it had no quantitative data to effectively advocate for workplace protections.

MUA discovered that around 11 percent of the 246 women surveyed in the San Francisco area earned less than California’s minimum wage. The majority did not receive breaks for rest or meals. One in five women were insulted or threatened by employers, and 9 percent were sexually harassed.

Joaquin was an organizer at the Filipino Advocates for Justice (FAJ) at the time of the study, which kept getting unsettling phone calls from women asking questions such as, “I’m getting paid $5 a day. Is that okay?”

Armed with data, these organizations joined forces with other nonprofits to visit the state capitol. Joaquin said legislative staffers often appeared perplexed about the issue.

“Domestic work?” they asked. “Do you mean domestic violence?”

Despite the policy makers’ ignorance, the coalition pushed for legislation that called for overtime pay, meal and rest breaks and a guaranteed eight hours of sleep for workers who lived in their employers’ homes in 2006. The bill made it all the way to Governor Arnold Schwarzenegger’s desk. He vetoed it.

The loss was heartbreaking.

Two years later, a housekeeper named Vilma Serralta sued her employers claiming they paid her only $1,000 to $1,300 per month, but forced her to work 14 hours a day, six days a week cleaning, cooking and taking care of the couple’s daughter. Her case mobilized domestic workers across California. With the 69-year old housekeeper leading the way, dozens of workers demonstrated in front of the 6-bedroom, multi-million mansion of Serralta’s former employers.

That was another moment for Joaquin.

“Every woman who marched was transformed. I was transformed.” Joaquin said. “There are certain moments in life when you’re facing something that you’re scared to do and you decide to do it anyway—and it changes you forever.”

The case brought needed attention to the plight of domestic workers. “Cases like Vilna’s started to shift the consciousness,” Joaquin said. “Workers could now say, ‘I’m not alone.’”

Joaquin held meetings at places like McDonald’s and grocery stores to organize Filipina workers. In 2011, they tried again for a law in Sacramento. They were policy insiders by then. In 2011 and 2012, five leaders in the domestic worker movement became fellows at the Women’s Policy Institute (WPI). They studied how policy and politics work: drafting a successful bill; winning over wary legislators; and building on their momentum to increase community support.

Joaquin and her domestic workers team named themselves the “macheteres,” meaning machetes in Spanish. They were determined to slash through prejudices and bureaucracies to win rights for women who historically did not have a voice and as a result, did not have equal rights.

“She was always working, always thinking and always strategizing,” said Reyes. Before key votes in the Senate and Assembly, Joaquin urged the group to lobby legislators right up until the last minute, grabbing elected officials during breaks for one last chat.

In 2012, the bill made it to Governor Brown’s desk before he vetoed it. But the “macheteres” persevered. Even after the WPI fellowship ended, they organized and worked connections in the capitol.

It all paid off. The governor signed the Domestic Workers Bill of Rights in 2013. One hundred thousand domestic workers, the vast majority of them women, now had rights to overtime pay.

More Work to Do

It was a huge victory but Joaquin said their work is not done. First, the original law will sunset on January 1, 2017 if it’s not renewed. There’s now a third WPI team working on making overtime pay permanent in California. Second, domestic workers must be educated about their rights. Many workers are still afraid. They fear retribution by employers if they ask for the overtime pay. Third, Joaquin and coalition members are focused on growing the movement. Knowing there’s power in numbers, their goal is to organize 10 percent of all domestic workers by 2017.

As a kid, Joaquin said she always wanted to know why. Why do people dig through the trash? Why was her immigrant father treated with disrespect? Why did her aunties and grandmother, who were also domestic workers, work so hard for such little pay?

So why does she organize? She says organizing is the best way to end injustice. You bring people together, show them they’re not alone and essentially give them a symbolic “machete” so they can secure justice and dignity for themselves and their communities.

Filed under: Featured, MUA in the News, News by MUA - Mujeres Unidas y Activas
Comments Off on Defending The Rights Of Domestic Workers