For Domestic Violence Awareness month we held a panel in both of our offices, beginning October 19th and ending October 22nd. Various community organizations and agencies including Instituto Familiar de La Raza, La Clínica de la Raza, Centro de Justicia Familiar, and therapists gave presentations on the resources that are available to survivors.

Here is the story of one of our members who was recognized this month at our 10th Annual “Si Se Puede” Conference.

My name is Maria Cortes. Thank you MUA for allowing me to share my own experiences on behalf of such a great organization. My childhood was very difficult—I suffered a lot and was left with emotional damage that I am still working on today. When I was introduced to MUA, I was given the opportunity to heal and I began to realize that as a teenager, as a young woman, and now as a mother, I was still experiencing domestic violence. I thought that such violence was normal because I had spent the majority of my life experiencing verbal, physical, and sexual violence. All forms of violence were around me and I thought that it was normal—that that is just how life is. When I came to MUA, it was as if they said: “Hey Maria, wake up! Life is beautiful, and it is even more beautiful to live without pain and fear.” They have given me the opportunity to heal. Today I have life goals and dreams that I seek to accomplish. For me it has been a great benefit to see my own growth because I now have the tools that I need to keep demonstrating to myself, and to others, that I am a brave woman; that I can make my own decisions, and that I can accomplish anything, despite my physical disabilities. I have learned to love myself, respect myself, accept myself, and to know what it is that I want. I have reached many goals and I now have a new way of seeing, feeling, thinking, changing, and overall, of believing in myself. I will continue to take risks so that I can have a better life. I am very grateful for my counselor, Laura, who I met for the first time when I was in the shelter. Laura gave me a warm hug that for me, at that time, meant a lot, and which was the first time that someone had given me something like that. Without her support I would not have been able to get to where I am now. Thank you Laura, thank you MUA—for teaching me to fly and showing me all that is possible with effort, courage, and drive to try to do things differently. I am very proud of the change that I have made in my life so that I can live a life without violence, and offer my daughter a life without violence—a life without pain. Thank you MUA for showing me a life that doesn’t hurt. I give infinite thanks to God for putting you in my path.

My name is Erika Sanchez. I am a Mexican immigrant, and I lived in a dysfunctional relationship for 12 years. In that relationship I became mother to two children and I lived thinking that what I was experiencing was normal. I didn’t want my children to be without their father, and I was very afraid of failing them if I left their father, because I did not have a job. My husband did not let me go out, I did not have friends, and I did not know anyone until I arrived to Mujeres Unidas y Activas in 2010. I arrived with great fear that my husband would find out that I was seeking help. I had to lie to him and say that I was taking my children to a program or to the doctor, but in the end he found out by asking our children where I was spending my time. He became more controlling and manipulative. He began to isolate me even more—I could not go out for many months and the abuse increased. I returned to Mujeres Unidas again, knowing that the abuse would get worse, but nothing could stop me. Seeing my child’s little faces gave me the courage and strength to keep fighting for a better world for them. The counseling and the trainings at MUA strengthened my self-esteem and I am now a valiant, independent woman, who is the leader of her own life and a leader in her community. 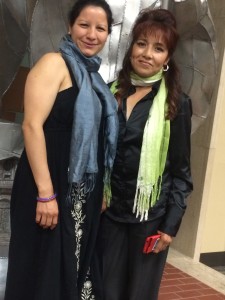