Testimony: “ICE Out of California”

I want to share with you my experience participating in an action against immigration raids on January 26.  At the end of last year and beginning of this year, our immigrant community learned of ICE’s plans to track down and detain children and families that arrived in 2014 as a result of the violence in Central America.  My entire body responded with rejection, impotence and pain to this action – even more so when I began to hear about the raids that ICE conducted in Georgia taking away children younger than 4 years old.

I heard people from different parts of my community talking about the terror planted by these decisions and actions.  I said to myself, “Don’t go out to the street where ICE will be.  Stay in your house.”  But I thought that we needed to demonstrate to our community that together we can do something.  I decided to participate in this direct action in spite of everything that could have happened so that our community could learn that it is time for us to take leadership.  .  In spite of the contributions our communities make, the hard work we do that makes this country richer, we are attacked and used in political speeches that blame immigrant communities for everything that happens.  We have rights as human beings and we aren’t going to permit another deportation.

We have dignity and we have lost our fear.  “No documents.  No Fear,” shouted our community in support of this action.  It was an experience where community power was manifested.  Hundreds of police were sent to arrest 20 people who had the courage to demonstrate to their community that we have the right to raise our voice, demand an end to deportations, respect for our children and our working families.  I am proud of myself and my MUA compañeras who risted arrest that day by taking over the streets.

You were in the streets with us.  Your support makes us feel strength in community and gives us the courage to take actions that as women and immigrants place us at risk.  MUA demands that ICE gets out of California.  We say no to the collaboration between ICE and police.  Yes we can!

We will continue in the struggle, 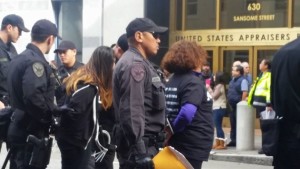 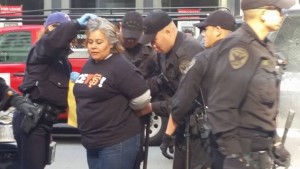 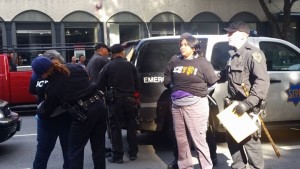 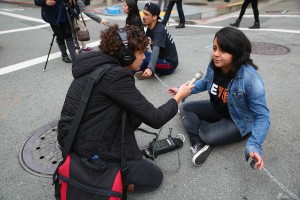