“This is part of the entrenched undervaluing of women’s work.”

“I felt like I was a slave,” she told The Huffington Post regarding the job she quit in 2014. Villasenor is from the Philippines and has been working as a caregiver in the U.S. for the past five years. She is one of thousands of domestic workers in California fighting to make overtime laws for caregivers permanent in the state.

“I had no days off for 18 months,” she said. “My boss took advantage of me, and I wasn’t getting enough pay. I was working like a horse, I didn’t even have time to read a book. I felt depressed, and oppressed.”

The California Bill of Rights currently protects overtime pay for personal attendants, such as nannies and caregivers for seniors or the disabled. But there’s a hitch: when the law was passed in 2013, it was signed as a provisional law, which means it will expire in 2017 unless a new law is passed by September.

On Friday, the California Domestic Workers Coalition launched a campaign to make overtime pay for domestic workers permanent in the state.

“The dignity of domestic workers isn’t a provisional right — it is something that should be a permanent condition,” said Katie Joaquin, campaign director for the California Domestic Workers Coalition, to the Huffington Post on Friday.

In California, there are over 300,000 domestic workers, according to a press release from Sen. Connie Leyva. Most of these workers are immigrant women.

“This is part of the entrenched undervaluing of women’s work,” said Joaquin.”These are mothers, aunties, grandmothers, who are breadwinners for their families, and are also supporting families in the country where they come from.”

“Working behind closed doors, beyond the reach of personnel policies, and often without employment contracts, [domestic workers] are subject to the whims of their employers,” the study said. “Some employers are terrific, generous and understanding. Others, unfortunately, are demanding, exploitative and abusive.”

In California, 90 percent of domestic workers who worked overtime did not always receive overtime pay, according to a 2007 Household Worker Rights CoalitionSurvey.

“This is part of the entrenched undervaluing of women’s work.”

“Often there isn’t a clear outline of what work is expected, the amount of time it takes, and that they should be paid for all of it,” Joaquin said. “There’s an unstated expectation that whatever needs arise, it is the domestic worker’s responsibility. When an employer has the power to make requests at whatever time, it feels like a relationship of servitude.”

Rather than giving workers a firm schedule, employers will often have an on-call arrangement, particularly for workers who live in the home, elaborated Joaquin. When work expectations are not laid out, workers are not able to live their own lives, be with their families, and do things they want to do on their own time.

“We’re watching over people around the clock,” Villasenor said in regard to her previous experience caring for a person with disabilities. “The family of the patient calls to see how he is doing. They aren’t there, the doctor isn’t there, you are there. Even in your sleep, you’re required to get up anytime they need you.” 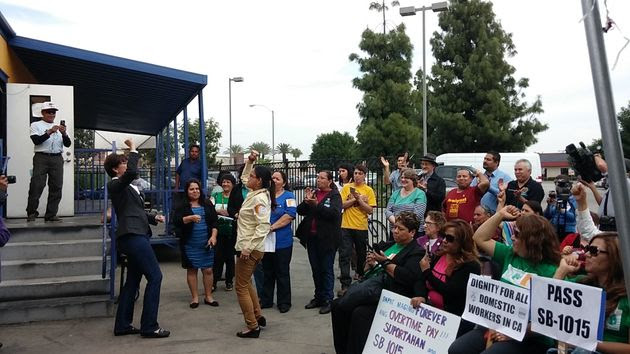 “Before, I was earning 100 dollars a day,” said Villasenor of her previous job. “Now I make 200 dollars a day! I still work 12 hours a day, but I earn more, I work Mondaythrough Thursday and I get overtime pay. I feel like a person now. I got my life back.”

Even if the new overtime bill is signed into law, that’s only half the battle.

“It’s not just the laws, it’s also getting them enforced,” said Joaquin. “Legislation is a vehicle, to raise consciousness, to assert what are dignified standards on the ground.”

“I asked ‘When we get a domestic bill of rights, will the abuse end?’ There was silence.”

After an overtime law took effect in New York state, for instance, just 15 percent of parents surveyed actually paid their nannies overtime, according to the Nation.

To enforce the law, a worker would have to bring a lawsuit against their employer or file an administrative claim with the California Division of Labor Standards Enforcement, according to the California Domestic Workers Coalition.

An alarming 91 percent of workers who encountered problems with their working conditions did not complain, because they were afraid they would lose their job, according to the 2012 study. What’s more, 85 percent of undocumented immigrants who encountered problems did not complain because they feared their immigration status would be used against them.

“At one of our coalition meetings, I asked ‘When we get a domestic bill of rights, will the abuse end?’” said Joaquin. “There was silence. It’s not like everything will all of a sudden be perfect. It’s a starting point, to create a culture shift around what the value of this work is, and what still needs to change.”