Editor’s note: This story is part of a series looking at the impact of paid sick leave on domestic workers in San Francisco and is funded by the Solutions Journalism Network. El Tecolote was selected as one of the newsrooms to participate in SJN’s Labor Cohort. 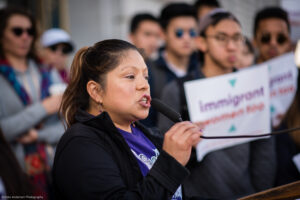 Evelin Alfaro has worked as a domestic worker in San Francisco for about 12 years, providing for her family doing a job that requires a great deal of physical labor.

But when Alfaro fell ill, as humans often do, she found herself in the same position that other domestic workers find themselves in: having little to no access to paid sick leave. Alfaro ended up getting fired for missing work, and going to the doctor that day with no paycheck.

In a historic move, San Francisco passed first-of-its-kind legislation on Dec. 14, 2021, granting paid sick leave to domestic workers. Yet as we approach the one-year mark of the passing of said legislation, questions remain as to how it will be enforced.

The central tool that city officials and domestic workers hope will help facilitate the implementation of this ordinance is an app that will keep track of users’ hours worked, paid sick leave and funds. The development of the app is currently in its second phase, according to city officials and members of domestic workers groups, and has yet to be implemented among the workers.

“We’re doing something very novel, hopefully we can create technology that would be accessible, but also usable,” said Lisa Pagán, strategic initiatives Director at the Office of Economic and Workforce Development (OEWD).

Dec. 14, 2023 will mark two years since the paid sick leave ordinance went into effect in San Francisco to secure domestic workers rights to receive what, by law, workers in other fields have been receiving for years. El Tecolote reached out to the San Francisco Office of Labor Standards Enforcement (OLSE) asking how many domestic workers have accessed paid sick leave since the ordinance went into effect, but OLSE didn’t respond as of press time.

District 9 Supervisor, Hillary Ronen, along with the California Domestic Workers Coalition (CDWC) first introduced the legislation to the San Francisco Board of Supervisors on Oct. 26, 2021. California labor law states that employees are entitled to paid sick leave, which comes out to one hour paid sick leave per 30 hours of work.

The OEWD is working closely with community members from organizations such as the CDWC, La Colectiva de Mujeres and Mujeres Unidas Y Activas. To better understand the wants and needs of the domestic workers who will become the users of the developing platform, the OEWD has been holding meetings to discuss such topics.

In these meetings, workers voice their opinions and concerns about accessibility and usability of the technology, language barriers and the information that they may be required to give to sign onto the platform. Pagán stated that the platform is believed to be coming in the form of a portable app, but she also added that it may change depending on what occurs in the meetings. The app will be available in the relevant languages, according to Santiago Lerma, Ronen’s legislative aide.

“We don’t see the meetings concluding because we also realize that we have other localities that might have taken the first step …It’s really important to continue to meet with this group,” said Kimberly Alvarenga, executive director of the CDWC.

Alvarenga’s mother immigrated from El Salvador and was a domestic worker in San Francisco. Her mothers journey is one of the things that motivates her to continue to help others receive support through CDWC.

“I do this work because my mom didn’t have the opportunity to have the same support. She didn’t have a California Domestic Workers Coalition,” said Alvarenga.

Pagán has been conducting research on what other states or cities have implemented regarding paid sick leave resources for domestic workers but so far, she hasn’t found anything quite like what they are envisioning. There is however an app called Alia Benefits that was created by The National Domestic Workers Alliance.

Domestic workers utilizing Alia Benefits can access their funds from the Alia Benefits app, which allows for multi-employer contribution. Multi-contribution is also an important feature for the forthcoming app in San Francisco that the OEWD hopes to develop because oftentimes domestic workers have more than one employer. This means that all hours worked with different employers will be combined and once the employee reaches the 30 hour mark, the employers will each contribute an equally divided amount to the paid sick leave fund.

Alia Benefits was made accessible to workers across the country, unlike the San Francisco app, which will be catering to workers in the city. Alia Benefits was put on hold and its users were notified and received any funds that were in their accounts. Mariana Viturro, deputy director of the National Domestic Workers Alliance, said that they are waiting to see the outcome of the research and development of the San Francisco app.

“We’re waiting to see what comes out of the research and development from the city of San Francisco and we want to be helpful partners. We especially want to share what we know from the previous iterations of Alia,” said Viturro.

Viturro pointed out that a big difference between Alia Benefits and the San Francisco app is that the San Francisco app is being developed in a city that has passed a paid sick leave ordinance. Developing an app side by side with an ordinance will make it easier to ensure that the mandated one hour paid sick leave per 30 hours of work is enforced.

Evelin Alfaro, a domestic worker and a member of Mujeres Unidas y Activas, cleans the houses of about five clients and says that she receives payment for her services via her Venmo account. She believes that having a platform with portable access to paid sick leave can help workers have more control and support.

“Paid sick leave is not something new, we didn’t make it up. It’s a right that already exists,” said Alfaro. “We’re just giving them a sort of notebook to keep track of our hours so that they can fulfill their responsibility to pay our sick leave.”

Pagán says that they are still in the planning phase for the app. “We plan to issue a Request for Information this fall followed by a Request for Proposals after to procure a third party developer and administrator for the Portable Paid Sick Leave System for Domestic Workers,” wrote Pagán in an email. Once the infrastructure for the app is developed, it will likely be launched in early 2023.

According to a 2020 report by the City University of New York Graduate Center, there are at least 10,000 domestic workers in San Francisco. Their study also found that 71 percent of workers are paid by what they described as an “informal employment arraignment,” such as “cash, personal check, or app.” These forms of payment are more convenient for those with a complicated legal status.

One of the concerns that has been raised in the meetings is the protection of domestic workers’ information regarding their legal status. There is fear that this may be something that will discourage the use of the app.

“We want to make sure that this [app] is available to all people regardless of their status,” said Lerma.

He added that another concern is the city’s reporting to the IRS and the requirements needed to proceed. He says that they are working through some of these challenges to try and keep workers’ information confidential.

“We are here working, we don’t want to feel the uncertainty of not knowing what could happen in the future,” said Alfaro.

Alfaro said that the domestic workers would like to have the platform be managed by the city or by the organizations of domestic workers. On August 20, Alfaro, Alvarenga and Guillermina Castellanos formed part of the Dignity Summer Resource Festival, held by the CDWC at ​​In Chan Kaajal Park in San Francisco. Domestic workers and community members attended to show solidarity with CDWC.

“We are very excited because it has been a big sacrifice on the part of the women, the domestic workers who after they’ve finished work, they run to organize and mobilize themselves to do community outreach and help workers who are experiencing theft of payment …” said Castellanos, who is co-director of La Colectiva de Mujeres and is also with CDWC.

Pagán will oversee the creation of information requests that the OEWD will send to app developers to search for the best candidate for the job. She will also be managing the request for proposal, both of which are public procurement processes, meaning they will be open to the public.

“We would definitely want to work with other ethnic and cultural media to share this information because nobody knows this exists or that it’s in the planning phase,” said Pagán.

Alvarenga said that along with having this ordinance enforced and the creation of the app, the city should also invest in educating the public about the current efforts being made. She wants domestic workers — and especially employers and homeowners — to be aware that if they hire domestic workers, they must pay the workers’ sick paid leave.

Similar to the Alia Benefits app, the use of the San Francisco app will not be mandatory, but will instead be a tool to help employers and employees keep track of work hours and paid sick leave. What is mandatory under California labor law however, is paying the employees paid sick leave regardless of whether or not they choose to use the app as their tracking tool or any other.

“It’s a way to facilitate their ability, their requirement to pay sick leave…they already have to pay it under the law,” said Pagán.

Just like Pagán, Alvarenga believes that media outlets are a good way to spread the word and she looks forward to collaborating with anyone that’s willing to hear.

“The policies are as successful as the implementation and so making sure that the city is making an investment in actually sharing information across the city with employers is going to be important,” said Alvarenga.

According to Alvarenga, many employers that they have spoken to are willing to help and participate in this new developing platform to help their employees. She wants to teach domestic workers that it’s ok to stand up and not be afraid to demand what by law they are entitled to.

“Hold employers accountable … to make sure that the domestic worker that works for you gets that one hour pay for every 30 hours worked,” said Alvarenga. “That’s not too much to ask.”