Biden Administration will put an end to Title 42! 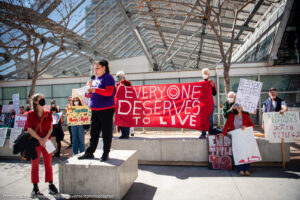 On April 1st, the Biden-Harris administration announced that on May 23 it will terminate the racist Trump-era policy, Title 42.  For over two years, Title 42 has allowed border officials to expel people seeking safety in the United States without giving them an opportunity to seek asylum and sending them to dangerous conditions, primarily impacting Black and Latinx migrants, all under the guise of the pandemic. According to human rights organizations, there are nearly ten thousand documented cases of people being kidnapped, tortured, sexually assaulted, and murdered as a result of these expulsions.

MUA has been participating this year in a national campaign pressuring the Biden administration to rescind Title 42. The announcement from the Department of Homeland Security is a testament to the power of our movement for a more humane and just immigration system.  Yet much more is needed.  We demand the administration not wait seven weeks and immediately end this inhumane policy, and that another cruel policy known as “Remain in Mexico” is also terminated, so that not one more person is sent to danger.

Cristina, a MUA member, is one of the thousands of survivors of this policy. She fled El Salvador due to the many kidnappings of women around her.  When she reached the US border, pregnant and very ill, she was denied medical care and her right to seek asylum.  After being expelled, the police in Mexico handed her over to a cartel, which kidnapped her for 20 days and deprived her of food and water, while pregnant. Today she is a leader, and has been sharing her testimony as part of the Welcome With Dignity Campaign.

We will continue to work so that other immigrant women like Cristina may seek asylum and safety. We will continue to hold the Biden-Harris administration accountable to deliver on their promises to build a humane and anti-racist asylum system for all