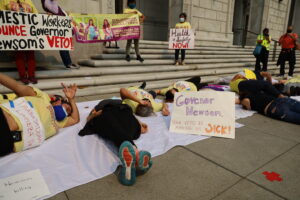 We are deeply disappointed to share that last week the Governor of California, Gavin Newsom, vetoed our Bill, The Health and Safety for All Workers Act (SB1257), which would have ended the 47-year exclusion of domestic workers from CalOSHA, the Occupational Safety and Health Act. This was the bill that MUA and all our partners in the California Domestic Worker Coalition (CDWC) had brought forward during the COVID-19 pandemic, not only to ensure Domestic Workers have the proper protections to do their work under these conditions, but to bring respect to the dignity of this work by recognizing it in the law. We had worked hard to get the bill introduced in both houses of the state legislature, and we were thrilled when it passed.

Our members feel disappointed that a Governor who has portrayed himself as an ally of workers during this pandemic turned his back on Domestic Workers. Many of them described feeling betrayed by the Governor, whose actions were a painful reminder of how Domestic Work is not seen as equal to other work, and not valued as worthy of protections under the law.

But we are not letting this setback slow us down! With our Bay Area partners in the CDWC, we have already launched a new municipal campaign for domestic worker rights in the City of SF, and this month   the San Francisco Chronicle ran an article about it, featuring one of our leaders, Mirna Arana.  Read all about it here.

As Veronica Nieto, MUA Organizer, stated: “During a time of pandemic, when we are sheltering in place at home, we nevertheless saw the leadership of many Domestic Workers, raising their voice and exercising their leadership to add their power behind the efforts to pass this law. And we brought much visibility to this movement. Therefore, we at MUA celebrate this victory and we continue onwards. We know we will return to this fight in the near future, because we are not going to wait to see Domestic Worker rights protected under the law.”