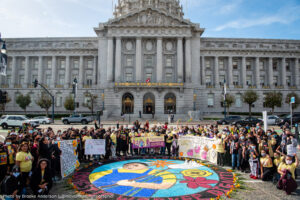 CDWC launched their first-ever municipal campaign in San Francisco for Access to Paid Time Off for Domestic Workers.

Sick leave is a right under state and federal law for all workers.  However, most domestic workers, who typically have more than one employer, do not have a system for accumulating sick leave pay.  Therefore, if a worker is sick or has a sick family member to care for, she usually either has to show up to work anyway, or else lose that day’s pay and possibly risk losing her job.   MUA, as a leader in both the National Domestic Workers Alliance and the California Domestic Worker Coalition, has been at the forefront of changing this unfair situation.

In 2021, MUA co-led a successful campaign in San Francisco to pass the first ever local ordinance in California to create a functioning system that will allow domestic workers to take paid sick leave.  The Domestic Worker Paid Sick Leave Ordinance mandates the creation of an app that must be utilized by employers and workers to enforce sick leave. For every day worked, an employer must pay a small fee into a worker’s city-managed sick leave account via the app.   The worker will be able to see the amount accumulated and access those funds when sick leave is needed.

Currently we are working with city agencies to get the system up and running. We will also be launching an outreach campaign to workers and employers to ensure they know how to use it.

Are you an employer?  Click here to learn more about this law and others affecting domestic workers in California.