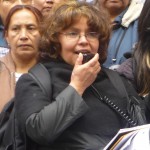 An immigrant from Mexico, Juana joined MUA as a member in 1991, and as staff in 1994. Juana began as one of MUA’s San Francisco’s Office Coordinators working with MUA’s Education Committee which focused on defending the rights of immigrant parents in the San Francisco School System; traveling with MUA’s street theater troupe that used creative performance to inform Spanish-speaking immigrants about their rights and proposed policy changes that would adversely affect them; coordinating trainings for the Caring Hands project; creating youth programs for the children of MUA’s members including Muchachitas, a leadership program for the daughters of MUA members and a partnership with the San Francisco Zoo, and; helping to design the new Park Alioto.

During her tenure on MUA’s staff, Juana has taken a leadership role in key local, statewide, and national campaigns, such as the campaigns to defeat statewide propositions 187, 227, and 209 and local proposition 21 and efforts to protect statewide prenatal health care programs.  She built strong partnerships with other immigrant parents, from organizations such as the Chinese Progressive Association around welfare reform and defending immigrant parents’ rights in the San Francisco school district.  She traveled to Washington DC to advocate for immigrant women’s protections in the Violence Against Women Act as well as participated in marches throughout the state and in the nation’s capital.  Juana also served as a plaintiff with MUA’s Program Director, Maria Jimenez in a 2000 case to block implementation of Proposition 227 which was filed the day after the measure was passed by voters.  The suit was filed on behalf of parents of limited English proficient students and their parents, as well as local and statewide civil rights organizations, who oppose the attempt to end optional bilingual education programs and limit parents’ choices for educational programs for their children.

Juana moved into her current role as Co-Director in 2001.  In her current role, Juana is responsible for planning and implementing all of MUA’s programs with a specific focus on building MUA’s collaboration with domestic violence and sexual assault service providers, ensuring the representation of immigrant women within our political coalitions and campaigns, and developing MUA’s member-led Board of Directors.  She also continues to provide individualized counseling sessions to MUA members, mentors MUA leaders, and maintains relations with key community allies and organizations.  Juana has served as the President of the National Domestic Worker’s Alliance Board of Directors from 2012-2014, represents U.S. domestic workers on the International Domestic Workers Network’s Coordinating Committee, and has traveled to Geneva annually as voting member of the United States’ International Labor Organization’s delegation.

Juana is a skilled facilitator and popular educator who has provided technical assistance to other immigrant women’s organizations in Iowa, Kentucky, Alabama, Texas, Washington, North Carolina, and Alaska.  She has made hundreds of presentations throughout the Bay Area on self-esteem, leadership, women’s rights, and MUA’s model at churches, universities, child care and head start centers, and community organizations.