MUA member leader Martha Herrera featured in the SF Chronicle on Jan 20, 2023.  She’s on our board of directors and participated on the committee to create the state guidelines as part of our 3-year campaign to create the first-ever state-level health and safety guidelines for domestic workers in the country! 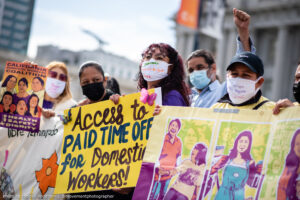 by Carolyn Said
Martha Herrera loves her work as a nanny, but sometimes it is physically challenging.

One of her young charges, who was physically disabled, needed to be lifted in the bathroom. As the child grew bigger, it was harder for Herrera, now 55, to keep up. Eventually, she wrenched her back. The child’s parents gave Herrera a mere $300 in compensation. That’s when she knew she had to quit.

“It was really hard because she was a wonderful, sweet child, but I also had to think about my health,” Herrera said in Spanish through an interpreter.

She hopes that other domestic workers won’t face situations where they might jeopardize their health or safety, thanks to new voluntary guidelinesCalifornia issued on Friday to ensure that homes are safer workplaces. Advocates laud this as a landmark: the nation’s first creation of parameters around the treatment of in-home child care providers, home health aides, gardeners, cooks, cleaners, day laborers and others who work in private homes.

In California, some 300,000 people, largely women and largely people of color, do domestic work.

Herrera was among 18 people — workers, employers, advocates, health and safety experts — who drafted the rules as members of the California Employment Safety Standards Advisory Committee on Household Domestic Services, established under SB321. The committee also issued policy recommendations that they hope will lead to new legislation this year.

“These guidelines are voluntary but they are significant,” said Kim Alvarenga, executive director of the California Domestic Workers Coalition.“Domestic workers deserve the same protections in the home (as workers in other) workplaces.”

The guidelines’ overarching message is that people who employ household help should consider their homes to be workplaces and safeguard the welfare of workers. They contain recommendations on proactively choosing tasks and hours; controlling hazards in daily tasks; providing personal protective equipment, reducing repetitive motion injuries, and handling conditions of extreme heat and wildfire smoke.

Next, Alvarenga hopes for legislation to bring domestic workers under the protection of California’s Occupational Health and Safety Administration office, or CalOSHA. In fact, state lawmakers passed this idea in 2020 with SB1257, the Health and Safety for All Workers Act, but Gov. Gavin Newsom vetoed it. The governor said he didn’t want to regulate people’s homes as if they were traditional workplaces. However, he left the door open to revisit the issue after seeking input from stakeholders — which is what the advisory committee did. “We’ve taken all the steps the governor has asked us to,” Alvarenga said.

Her other priorities are to spread the word to employers and workers about the new guidelines, and to create a fund to help employers comply with the recommendations. For instance, elders and people with disabilities may need to buy a Hoyer Lift to assist them in transferring in and out of bed, chairs and the bathroom. “That’s a big, expensive item that a lot of folks don’t have the privilege to access,” she said.

Anna Pisarello was among the employers on the advisory committee. When she first hired a nanny to watch her two toddlers in her Berkeley home, she was “taken aback by the lack of guidance for employers and the lack of protections for domestic workers,” she said.

She hopes the committee’s work will further the recognition that domestic work is important.

“This feels like a pivotal moment in this labor issue,” she said. “California can serve as a model for other states so they too can start looking into what changes can be implemented to further protect domestic workers, which results in a healthy and more equitable society.”

Herrera, the nanny who was on the committee, had similar thoughts.

“For me, it was really fabulous domestic workers were being taken into account in this way,” she said of the committee. “That we could share our experiences, that they were putting attention on domestic workers, was really exceptional. We are suffering; we are marginalized; our work is not treated like other work. I was really happy and proud to have this. There are thousands of us who feel like we deserve this respect.”

This article is reposted for educational purposes only from the San Francisco Chronicle.