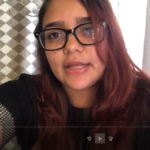 Yenny (or Jenny) Menjivar joined MUA in 2020 and she has been a powerful immigrant leader ever since. She first shared her testimony at the Women’s March in Oakland on March 8, 2020, about being in immigration detention with her daughter. Soon after, Yenny became a member of Defensoras de MUA (MUA Defenders), a member committee dedicated to being a refuge for women impacted by immigration detention or deportation proceedings in court. She is one of MUA’s leaders building power for the Immigrant Women Too campaign to defend asylum protections for immigrant survivors of domestic violence and other forms of gender-based violence.  In this video, Yenny shares her experience coming to the United States and why she has joined this campaign. Yenny was also featured in this article in Ms. Magazine about the litigation involved in this campaign, “As Trump Doubles Down, Courts Side with Immigrant Women Seeking Asylum.”