The following article is translated from the Telemundo48 website. Please click the link to watch the video.

Link to the video: https://www.telemundoareadelabahia.com/noticias/local/activistas-rechazan-proyecto-ley-modernizacion-fuerza-laboral-agricola-san-francisco/2252132/?fbclid=IwAR04I-aU6w0Ivtvj6gwgX4eP5N1YjPb8swsrnnz8qmtTNzZLxpWv5ioStTQ 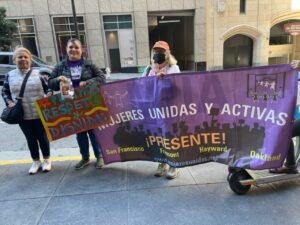 A coalition of opponents of an immigration bill focused on agricultural workers held a demonstration against the proposed legislation at Senator Padilla’s office in San Francisco, according to a press release by the spokespersons of the organizations, Renee Saucedo and Karl Kramer.

The coalition includes the Alliance of Active and Solidarity Women, known as ALMAS, the San Francisco Labor Council, the San Francisco Living Wage Coalition and several others. The groups are urging Padilla and other legislators to reject the law for the Modernization of the Agricultural Workforce.

The law would expand the E-Verify program and review the H-2A guest worker program, as well as establish a designation of Certified Agricultural Status for certain migrant agricultural workers and create a housing program to provide rental assistance for rural housing, according to a summary of the bill on congress.gov.

The bill was approved by the House and is being negotiated by the Senate.

Saucedo, who is also program director at ALMAS, said that the coalition is concerned that senators are close to reaching an agreement to approve the bill.

“We firmly believe that agricultural workers deserve something better than the Law on the Modernization of the Anti-Labor Agricultural Workforce,” Saucedo and Kramer wrote. “We do not want laws that divide workers, we want living wages, better protections for agricultural workers and a comprehensive immigration reform for all workers.”

Monday’s rally and press conference are part of a National Day of Action for Justice for Agricultural and Immigrant Workers organized throughout the country, according to the statement.