MUA was featured on Telemundo 48 (Spanish language news station) on March 21, 2022.  The following article is translated from the Telemundo48 website. Please click the link to watch the video.

They demand an end to a policy that prevents asylum at the border. 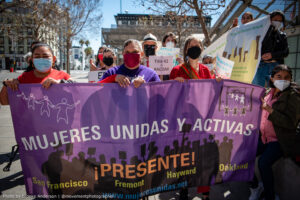 Link to the video: https://www.telemundoareadelabahia.com/noticias/local/exigen-poner-fin-a-politica-que-impide-pedir-asilo-en-la-frontera/2213718/

Protesters denounced that this policy has been used to discriminate against people.

Dozens of people protested on Monday in front of the Federal Building in San Francisco to demand that immigration authorities put an end to Title 42, a policy that does not allow people to seek asylum at the border allegedly due to the pandemic.

“That cruelty they commit with returning them, because they put us more at risk, we have been fleeing violence, and far from shaking hands, they throw us dirt,” said one of those attending the demonstration.

During the event, the case of a 21-year-old girl was shared, who, although  was present at the place, preferred that her testimony be read.

In it she described how she was returned to Mexico on a bus, she was arrested by the police and then allegedly handed over to a drug trafficking cartel.

“On the way we learned that the police had handed us over to the cartel, they had us kidnapped for 20 days, we had no food, no water, and not able to use a bathroom,” the young woman said.

The protesters also denounced that this policy has been used to discriminate against people, since, for example, on March 11, an exception was authorized for people from Ukraine.

“And it is not to say that people from Ukraine do not deserve to enter, of course they deserve it, but every human deserves the opportunity to ask for asylum and security for their families and themselves,” said Abril Newman, spokesperson for California Immigration Justice Collaborator.

Every 60 days this Title 42 is reevaluated by the Center for Disease Control, the hope of these groups is that next March 30 will be completely suspended.