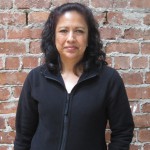 Monica González is an immigrant mother of two children who came to the United States searching for a better life for her family.  She came to MUA as a member over fifteen years ago and has graduated from every training program MUA offers.  She credits MUA with helping her to obtain economic security for herself and her family.  Monica has been active in MUA’s political campaigns for immigrant rights since the 1990s.  For almost a decade, Monica has been a Peer Counselor at MUA and she was one of MUA’s first Sexual Assault Crisis Counselors.  In these volunteer roles, Monica has been able to listen and identify resources for survivors in her community and send them the message that they are important and deserving of respect.  Monica joined MUA’s staff at the beginning of 2015 as our new Domestic Violence and Sexual Assault Services Coordinator.