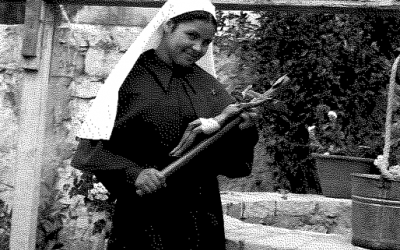 These two pilgrimages have been of hope, faith, and love, as well as of consciousness, resistance, and political advocacy. After these experiences of pilgrimage during which I have had in mind my own pilgrimage and that of my brothers and sisters who have migrated and are migrating now, it has been a great honor and privilege to be part of the 100 women 100 miles team. It has been very fruitful and important for me to renew my spiritual calling to continue to move forth our stories and ask that the holy Pope continue to elevate our voices when he meets with politicians so that they may have compassion, be welcoming to immigrants, and treat us with the dignity we deserve. We were able to join many groups of women in El Paso, Texas, where we shared the work that we do in our communities, specifically with Latino families.We were able to walk with members of AFL-CIO, meet people from various faiths, and be present during the mass that the Pope offered to all of the immigrants on either side of the border. This space allowed us to be with the children and youth who have recently arrived to the U.S. and are in proceedings to be able to stay in this country.

As I began the pilgrimage along the border from El Paso to Juarez, I felt very moved when one woman arrived and told me, “I want to welcome you. I am a mother who is in the struggle because one of my daughters in missing.” This resonated in my soul. I asked myself, “why, God? Why do much suffering?” As a mother, I felt great pain for her. I asked myself, “how can she continue living?” What I know gives her strength is being in the struggle with other mothers who have had similar experiences and who have lived under fear imposed by a corrupt government. This woman was an example for me to follow by continuing to resistant and never remain silent.

In this moment during which the wound to my heart remains open, I continue to feel impotent. Entering the court and seeing the way in which our immigrant brothers and sisters are treated was very saddening. Entering and seeing the sadness and suffering that marks the faces of those young people who are being held, when the only sin they have committed is to come to this country searching for work so that they and their families may survive, being treated so coldly without the least bit of compassion. I spent most of the time crying and I still cry when the images of those faces so marked with disillusion, abuse, marginalization come to mind, and when I think of the way that the coldhearted police would stand before them without any sympathy and mock them. After about an hour of standing detained, many with injuries from their journey, the judge came forth.

My participation in this second pilgrimage was very important to me as a continuation of the pilgrimage in September. Our voices must be heard loudly and with certainty as we demand that we are given liberty. They have forgotten the meaning of justice and we are here to remind them and to demand that they practice equality. We will not stop asking the Pope that he not be tired of continuing to speak for kindness and love.

In September at the White House we had visibility and were able to have a meeting during which we told our stories. They did not take away our motivation when they proceeded to begin to implement more raids and intimidation across the country and that is why it was important to us to take our message and our stories to the Pope again.

My hope is to have a meeting with the Pope, face-to-face, so that he can see that we are really here. That we are bone and flesh. That his voice and his calls to action must be heard by politicians. That we deserve to be free; we have families to support. The politicians of our countries force us to migrate because of the lack of security that exists and the risks that we must live under. We are not the causes of the political, economic, and social problems that they are experiencing, but rather, we have proven ourselves to be the solution.

I ask that We Belong Together continue offering these activities in which women who are mothers, workers, and immigrants can continue to show the world our realities and asking for changes to legislation that continues to marginalize immigrant workers.

For Guillermina Castellanos, the Pope’s message on compassion for immigrants is personal. Though she and her nine children are U.S. citizens, the California resident said her husband has been living in the U.S. for about 20 years and has not been able to legalize his status. Every time her daughters see a police officer drive up behind them, they’re afraid that their father will get pulled over and get arrested for being undocumented.

“I tell them, ‘Don’t be afraid. The cop won’t do anything to your dad,'” Castellanos said. “But they still live with that constant fear.”

The Pope’s trip to the city of Juárez, Mexico on Wednesday is drawing hundreds of thousands of faithful on both sides of the border. But as the eyes of the world descend on the Pontiff’s visit to the area, some U.S. families like Castellanos say they want to ensure that people focus on the Pope’s message of compassion and dignity for immigrants.

Castellanos was one of 150 women from across the country who took part in a pilgrimage across the border to call attention to immigrants’ lives. The women met in El Paso Tuesday morning and crossed the border to Juárez through the Paso del Norte International Bridge. Once in Mexico, they met with women from Juárez and prayed together inside a cathedral that is dedicated to the Virgin of Guadalupe.

The women from both countries prayed together for those who have died trying to cross the border and for those who had crossed into the U.S. but have since been deported and separated from their families.

While some of the faithful have journeyed to Juárez to stay until the Pope’s visit, the group of women returned to El Paso, a few steps away from the border, where they will be when Pope Francis celebrates mass. In this border city the group went to a federal courthouse to observe how immigrants are prosecuted and, in many cases, ordered deported through a program called Operation Streamline. They concluded the pilgrimage with a closing mass and dinner at the Sacred Heart Church in El Paso.

“Our message to immigrants is that they’re not alone,” Castellanos said. “We are fighting for them every day.”

Many of the pilgrimage participants were also part of a group of women who in September set out on a 100-mile pilgrimage from Pennsylvania to Washington, D.C. They arrived at the nation’s capital just before Pope Francis addressed a joint meeting of Congress and met with President Obama.

“Last September, we asked the pope to be a voice for immigrants,” said Juana Flores, a former nun who participated in both pilgrimages. “He did that, but we saw that it didn’t produce results. We still see deportations and raids happening in our communities.”

Pope Francis has repeatedly spoken about the plight of immigrants and refugees. During his visit to the U.S. in September, Pope Francis urged compassion for immigrants during a speech to Congress. He delivered a similar message during his six-day trip to Mexico that will conclude after he celebrates mass in Juárez, not far from the border.

Flores and the other women who participated in Tuesday’s pilgrimage are hopeful that through his trip to the border, the pope will call attention to the plight of migrants trying to cross the border in pursuit of a better life in the U.S. as well as how current policies are affecting the lives of undocumented immigrants and their families.

“This is a pope who hasn’t been afraid of speaking out about immigration, and we are very thankful for that,” said Flores, who is co-director of Mujeres Unidas y Activas in San Francisco. “I have a lot of faith that his words will lead to big changes.”

Filed under: Featured, MUA in the News, News by MUA - Mujeres Unidas y Activas
Comments Off on Women Journey to Mexico to Put Focus on Immigration During Pope Visit