SF’s limited-English sexual assault victims among the most ignored

SF’s limited-English sexual assault victims among the most ignored
by Julian Mark
published on Mission Local on March 8, 2018
Link to original article 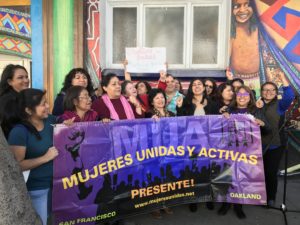 Photo: Dora Mejia (5th from right) celebrates the settlement of her lawsuit in a press conference at the San Francisco Women’s Building.

Nearly three years have passed since Dora Mejia filed a lawsuit against the City of San Francisco that exposed the barriers many monolingual sexual assault victims experience when interacting with the SFPD, but advocates say the problems still remain.

Mejia was arrested after her ex-partner sexually assaulted her in a Mission District apartment in 2014. He left the apartment, called the police, accused Mejia of attacking him. When officers arrived, they refused to offer her an interpreter, insisting that she use the best English she could.

Police arrested Mejia and left her three children with the ex-partner as she sat in jail overnight.

On Thursday, Mejia and the advocacy community announced her $50,000 lawsuit settlement at the Women’s Building.

“What happened to me was outrageous, and because of that, I had to stand up and speak up to this injustice,” Mejia said.

“I was able to get out of my horrible situation,” she added. “Many people are afraid because their partner initiates them with their children or immigration status.”

Despite her court victory, advocates say delays in language services — or, in some cases, an utter lack of those services — continue to result in wrongful arrests and inaccurate reports by the SFPD, even as the department attempts to refine its program.

Advocates said that many problems remain, but that the situation has improved since SFPD began hosting a language access working group in 2012.

“Unfortunately, we continue to see this pattern where officers don’t go through process of identifying language and carrying out interviews, trying to rely on whatever limited English the individual might be able to produce, if any,” said Ana De Carolis, a program coordinator with Mujeres Unidas y Activas, a grassroots organization for Latin American women.

De Carolis, speaking at a recent Police Commission meeting, described an incident in which a woman had been in a car accident. Afterward, an officer interviewed her at the hospital in English, even though she told him she could not speak English.

“It turns out the report was written based on the interview that contains gross inaccuracies and misinformation,” De Carolis said.

De Carolis could not comment further on the specific case, but she said those kinds of inaccuracies can result in victims being excluded from accessing services and victim compensation. In addition, their cases may be delayed in court.

“These roadblocks are affecting people in their right to access justice, as well as services, reparations and healing,” she said. “They re-victimize the victim and may end in wrongful arrest and problems stemming from inaccurate reports.”

In the 2016-2017 fiscal year, 27 complaints related to language access were filed with the Department of Police Accountability. Six were sustained, 11 were not sustained, one was mediated, one “not found” and eight are still pending.

But the number of those affected by the scarce language resources could be much higher.

“Many of the survivors don’t want to come forward, because this is such a fearful time — not because of what’s going on in San Francisco, but the political realities are keeping communities afraid,” said Beverly Upton, executive director of the San Francisco Domestic Violence Consortium, during the meeting.

Upton said stories like Mejia’s, and the one told by De Carolis, are “a drop in the bucket.” She offered an account of her own.

Six months ago, she said, a deaf mother was arrested after she called police to the scene. They did not provide her assistance in American Sign Language when she requested it, and she was held for several days.

“While everything was getting worked out, several of us got an Amber alert,” Upton said. It turned out “her child had been taken by the unstable dad she was trying to warn us about.”

Dispatchers are now instructed to contact bilingual officers directly if they receive a call in another language. Before, he said, those kinds of calls were sent out to everyone.

“Right now, we’re not seeing that,” she said. “The system rewards officers who move around. What we would like to see is incentives to stay stations where they are most needed.”

Maria Jimenez, a program coordinator at Mujeres Y Unidas Activas, has been accompanying victims of domestic violence and sexual assault to file reports at Mission Station for 18 years.

In recent years, she said, the wait times have become longer, and officers at the station have become increasingly reliant on the so-called language line, a telephone line officers can call to receive interpretation services with limited-English residents.

“That’s not what our survivors are looking for,” she said. “It’s important to know you can speak one-on-one with someone who speaks your language and knows your culture.”

She said long wait times and the lack of personal connection can be traumatizing to victims.

“If a woman is ready to take the step to file a report and is not able to, then many times the individual will go back to the abuser, the cycle of violence,” she said.

“If you can’t do it in a timely manner, you may not go back another day to file a report,” she continued. “It’s so hard to take that first step.”

Filed under: Blog, Featured, MUA in the News, News by MUA - Mujeres Unidas y Activas
Comments Off on SF’s limited-English sexual assault victims among the most ignored