Note: The following article, published in The New York Times on June 16, 2021, features the story of Leticia, a member of MUA’s Defensoras program.  Defensoras is a unique mutual aid and leadership development program for asylum seekers and other Latina immigrant women impacted by the trauma of detention and family separation.  The group meets twice monthly to discuss their cases and support one another. MUA staff help them amplify their stories to the media and elected officials.  Members of Defensoras, including Leticia, testified to the Justice Department to pressure the administration to make the changes detailed in this article.

By Katie Benner and Miriam Jordan 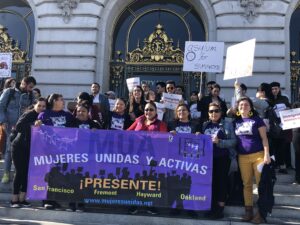 The decision will affect tens of thousands of cases moving through backlogged immigration courts.

WASHINGTON — Attorney General Merrick B. Garland reversed on Wednesday Trump-era immigration rulings that had made it all but impossible for people to seek asylum in the United States over credible fears of domestic abuse or gang violence, marking one of the Justice Department’s most significant breaks with the previous administration.

“This decision will save thousands of lives,” said Malena Mayorga, director of leadership development at Mujeres Unidas y Activas, a grass-roots organization of Latina immigrant women in the San Francisco Bay Area. “The majority of women with asylum cases we see have claims based on domestic and gender-based abuse or organized-crime violence,” she said. Many of the asylum seekers participate in a support group that has been campaigning to reverse the decision, she said.

His decisions came in closely watched cases where his predecessors, the former attorneys general Jeff Sessions and William P. Barr, broke with precedent to overturn decisions by immigration appeals judges that would have allowed such asylum claims.

The decisions — applicable to all cases in the system, including appeals — will affect tens of thousands of migrants. Hundreds of thousands of Central Americans fleeing gang extortion and recruitment and women fleeing domestic abuse have arrived in the United States since 2013, and many cases are still being adjudicated, given an enormous backlog in immigration courts.

“These decisions involve important questions about the meaning of our nation’s asylum laws, which reflect America’s commitment to providing refuge to some of the world’s most vulnerable people,” the associate attorney general, Vanita Gupta, wrote in a memo to the Justice Department’s Civil Division.

Ms. Gupta asked the Civil Division’s immigration arm to review pending cases that could be affected by Mr. Garland’s reversal.

The move is the administration’s latest reversal of a Trump-era policy. It has also defended the constitutionality of the Affordable Care Act, a position that officials had abandoned during the previous administration. The Biden Justice Department also sided with unions in a case that could affect restrictions on organizing workers.

“We’re really heartened by this decision,” said Karen Musalo, a lawyer representing one of the asylum seekers and a professor at the University of California, Hastings, College of Law. “It restores the possibility of protection to those whose very lives are in the balance.”

Previous administrations had agreed that people fleeing domestic abuse and gang violence could be considered people who have been persecuted on account of their membership in a “particular social group,” a definition that allows them to seek asylum in the United States. But attorneys general can overturn decisions made by immigration judges because their courts are housed under the Justice Department, not the judicial branch.

In the case of A-B, named for the initials of the woman seeking asylum, the department’s Board of Immigration Appeals found in 2016 that she was part of a particular social group, saying that the government of El Salvador does little to protect people in violent relationships. That assessment qualified the woman for asylum, but Mr. Sessions overruled it in 2018.

Mr. Sessions declared that asylum claims had incorrectly expanded to include victims of “private violence,” like domestic violence or gangs. Mr. Garland vacated that decision.

In a case called L-E-A, the initials of another asylum applicant, the Board of Immigration Appeals ruled that an immediate family member could be considered part of a particular social group in a case where a Mexican man was targeted by a drug cartel after his father refused to let the gang sell drugs from his store.

Mr. Barr reversed that board ruling in 2019. Mr. Garland vacated it.

Among those who stand to benefit from Mr. Garland’s actions is Leticia, a 40-year-old Guatemalan who has a pending asylum case in San Francisco.

“I feel like God is giving me another chance to live with this decision,” said the immigrant, who asked to be identified by only her first name to protect relatives in her home country.

Leticia said she endured years of abuse at the hands of her former husband. Then, after she witnessed the murder of two men in a tortilla shop, gang members who controlled the area began stalking and threatening to kill her.

Two men on a motorcycle had shown up and gunned down two men inside the shop. Later, the assailants tracked down Leticia, who worked at a bakery, she said. “They threatened to finish with me,” she said.

The relentless threats prompted her to journey over land to seek safety in the United States with her 6-year-old son in 2019.

The Trump administration’s decisions to narrow opportunities for asylum were widely regarded as attempts to curb immigration at the southwestern border by eliminating protections guaranteed by U.S. and international law.

To qualify for asylum, applicants must establish that they have a well-founded fear of persecution on account of their race, religion, nationality, political opinion or membership in a particular social group. Before the decisions by the Trump administration, victims of domestic abuse and other violence were eligible for protection, on an individual basis, by meeting the standard for membership in a particular social group and other requirements for asylum.

When Mr. Sessions argued that asylum claims had expanded too broadly, human rights groups fiercely criticized him as many judges ruled against claims that involved gang and domestic violence, without a case-by-case analysis.

In the year after his decision, rates of asylum granted to people from El Salvador, Guatemala and Honduras plunged 38 percent.

Mr. Garland’s move to vacate the decisions underscores the importance of analyzing each case on the merits, lawyers said.

“Every woman fleeing domestic violence and every individual fleeing gang violence now has the opportunity to have their case decided fairly, applying the law to their facts without having the dark cloud of bias and prejudgment” imposed by the Trump administration’s decisions, Ms. Musalo said.

President Biden promised a more humane approach to immigration than his predecessor, and his administration continues to grapple with a large volume of migrants arriving at the southwestern border, many of whom are fleeing violence.

“This decision will save thousands of lives,” said Malena Mayorga, director of leadership development at Mujeres Unidas y Activas, a grass-roots organization of Latina immigrant women in the San Francisco Bay Area.

“The majority of women with asylum cases we see have claims based on domestic and gender-based abuse or organized-crime violence,” she said.

Many of the asylum seekers participate in a support group that has been campaigning to reverse the decision, she said.

The number of immigrants detained at the southwestern border has climbed for 13 consecutive months, according to Customs and Border Protection data. From Oct. 1 through May 31, the United States took into custody 898,949 migrants crossing the border, compared with 859,501 in the 2019 fiscal year, during the last surge.

But encounters with unaccompanied minors and families from Northern Triangle countries dropped last month. A total of 10,765 children were taken into U.S. custody in May, down from 13,940 in April. About 22,600 people in families from the region were processed by the Border Patrol, compared with about 32,600 the previous month.