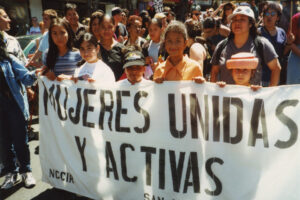 In 1989, Maria Olea and Clara Luz Navarro, Latina immigrants living in the Bay area, were hired by a research team at San Francisco State University to help them learn about the conditions faced by women in their community.  Through numerous interviews, they documented the extent of a desperate reality that they themselves faced as newly arrived immigrants – widespread domestic violence, extreme poverty, isolation, fear, and frequent violations of the most basic rights.  While the conditions Olea and Navarro witnessed were sobering, they discovered an underlying strength:  Though isolated and often unaware of their rights, the women interviewed shared a spirit of struggle and perseverance and a desire to act towards positive change.  These initial encounters birthed Mujeres Unidas y Activas (MUA) – a membership-based Latina immigrant community organizing and empowerment program.  Over 30 years later, MUA is a grassroots organization with a budget of over $3 million and a staff of 30+ that reaches thousands of Latina immigrant women throughout the San Francisco Bay Area each year. MUA has a dual mission of promoting personal transformation and building community power for social and economic justice.

MUA’s innovative leadership development model trains members to plan and implement our programs and lead our work for social justice. MUA is proud to be a national model for Latina immigrant empowerment and organizing and to have created a healthy, sustainable grassroots-membership led organization. Through the leadership development of our community members and the founding of a variety of local, state, and national coalitions and alliances, MUA has constructed a political force that enables Latina immigrants to effectively advocate on their own behalf, and in so doing impact the lives of countless immigrants in the Bay Area and beyond. MUA has helped cultivate a strong base of women, once isolated and disenfranchised, who are now leaders and organizers –defining and leading community education and organizing efforts on the issues that most affect them.

MUA is a grassroots organization led by and for Latina immigrant women. Photo copyright Noah Berger / 2018

MUA’s past organizing successes have ensured that immigrant women have access to pre-natal care in California and improved access to translation services in Alameda County hospitals and clinics; the Violence Against Women Act includes specific provisions addressing the needs and circumstances of immigrant women; and increased visibility of the economic contributions of immigrant women and need for basic labor protections for domestic workers, the caregivers that make all other work possible in our economy.  MUA is a founder of the National Domestic Workers’ Alliance, spear-headed efforts to pass the California Domestic Worker Bill of Rights, and has been at the forefront of the movements to end family separations and build a pathway to citizenship for all immigrants.