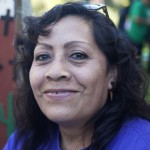 Sylvia Lopez is originally from Oaxaca, Mexico. She has been a Domestic Worker for over 10 years in the United States and has been organizing for Domestic Worker Rights in California since 2006. She has been an active leader in the Immigrant Rights movement and has supported organizing efforts in Washington, New York, California, and Michigan. She joined Mujeres Unidas y Activas in 2006 due to domestic violence. As a MUA member, she participated in marches, and various events such as trainings that have been a positive influence in her life and that of her daughters’. She was the president of MUA’s Board of Directors. She now coordinates “BIG” (Basebuilding Innovation Group) a new program in collaboration with the NDWA that supports workers so that they will have the courage to speak out against the injustices that occur in their line of work. She is grateful of the support she has received from her fellow co-workers, and MUA members.